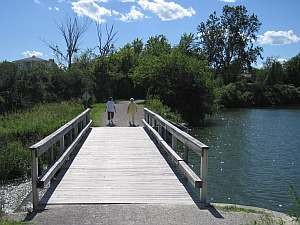 The Fairfield Loop Trail recently received an award at the Mid-America Trails and Greenways Conference (MATAG).  The bi-annual conference was held October 27-30, 2013 in Matteson, Illinois.  The conference is sponsored by an affiliation of trails and greenways planners and promoters representing nine states in the Mississippi and Ohio River Valleys.  Two awards were granted for each state, one for a person who has been influential in trail advocacy, and one for an exemplary trail.  This year’s Iowa state awards went to Chuck Offenburger and the Fairfield Loop Trail.  This award shows the Fairfield Loop Trail is not only an asset to the local community and the state of Iowa, but is an asset to the entire Midwest. 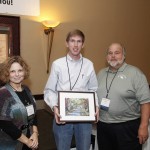 The Fairfield Loop Trail project was first conceived in 1997 when the Jefferson County Conservation Board recognized the demand for trails in Fairfield was outpacing the supply.  The Jefferson
County Trails Council was formed shortly thereafter to “create an integrated trail system that will allow all citizens and visitors to enjoy the benefits of health, recreation, education, and safety.”

Fourteen years later, the 15.9-mile Fairfield Loop Trail was completed.  The completion of the project is an example of incredible community involvement, cooperation, and persistence.  The project would not have been possible without the support of the City of Fairfield, Jefferson County, and the Iowa Department of Transportation.

French-Reneker-Associates Successful in Aiding Three for Three Communities in...