French-Reneker-Associates was founded in 1952 by Donald E. French in Kahoka, Missouri, with the original name of French Engineering. 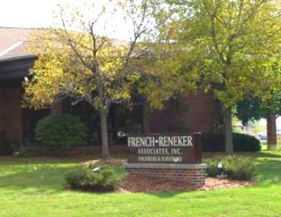 In the early days of Don’s practice, he did a great deal of work for counties in Iowa, upgrading their farm-to-market roads.  As Don’s practice became more and more Iowa-oriented, he moved the practice to Fairfield, Iowa, in 1961.  As small communities began to modernize with water and wastewater systems and paved streets, more and more of the work became municipal in nature.  In 1965, Don was joined by W. Daniel Reneker, a bridge designer for the Iowa Highway Commission.  Dan became president of the firm upon Don’s death in 1982.  Ken Bucklin became a member of the firm in 1983 after a 21-year career with the Iowa State Highway Commission and as county engineer in Appanoose and Keokuk Counties.  Ken assumed the role of president when Dan Reneker retired in 1994.  John Meyer joined the firm in 1995.  He previously held positions in municipal engineering and public works. This included work in Davenport, Oskaloosa, Newton, and Waterloo.  John assumed the role of president of the firm in December of 2004 upon the retirement of Ken Bucklin.  Steve Hausner became President in 2014 after John’s retirement.French-Reneker-Associates, Inc., is an employee-owned engineering firm offering a full range of civil and environmental engineering services; land surveying; topographic surveying; and planning to our clients.  Our many successful projects include sanitary sewer, water distribution, dams, wetlands, grassed waterways, airport, street and highway, water treatment, wastewater treatment, industrial park, and subdivision design.  Current officers of the firm are Stephen W. Hausner, PE & PLS, President; Matthew P. Walker, PE, Vice-President; Stephen I. Pedrick, PE, Secretary;  and Jason C. Hull, PLS, Treasurer.  These officers comprise the firm’s board of directors.The firm’s experienced staff is capable of meeting client needs on a wide variety of projects. These range from initial feasibility and planning reports for various projects to the complexities of designing a complete water or wastewater treatment facility for a community of 10,000 people or a multi-lane highway for the state of Iowa.We look forward to the future with the knowledge that our firm consistently provides individualized engineering services to our clients.  We take pride in providing the extra measure of service to meet our client’s needs.