French-Reneker-Associates, a southeast Iowa civil and environmental engineering company, recently installed a solar array behind its office on South Main Street in Fairfield. The 40.8 kilowatt (kW) array will provide around 80% of the building’s electricity and save over $9,000 per year on electric bills. In addition to saving the company an estimated $200,255 over the next 25 years, the array will also prevent 841 metric tons of CO2 from entering the atmosphere during that same period – equivalent to over two million miles of driving in a typical car.

For Steve Hausner, president of French-Reneker-Associates, cutting the company’s high utility costs was a priority. “When I took over as president four years ago I learned about some of the costs of running this business. I was surprised to see that our average electric bill was just over $1000 a month,” he said. “I thought, ‘That’s six to eight times more than I pay for my house, which is only 3 times smaller.’ There’s room for improvement on our electric bills.”

According to Ideal Energy, which designed and built the array, French-Reneker-Associates’ investment in clean energy has among the fastest payback periods seen so far in solar projects in the area.  Aurelien Windenberger, finance and design expert at Ideal Energy, attributed the fast payback period to the falling cost of solar and the high price French-Reneker-Associates pays for electricity.

French-Reneker-Associates also upgraded its office lighting to LEDs. By switching to more efficient lighting before building the solar array the company was able to increase its savings and install only as much solar as it needed.

The LED lighting has already saved money compared to this time last year. “The conversion from fluorescent to LED lighting represented about a 20% decrease in our electric usage.” Hausner said.

French-Reneker-Associates, which primarily works with municipalities on projects ranging from roads to sanitary sewer systems to trail systems like the Fairfield Loop Trail, said that the solar project dovetails with the values of its customers. Fairfield and Bloomfield, two of the company’s customers, have significant solar projects of their own. “The solar array identifies that we have similar goals,” Hausner said.

For Hausner and his colleagues the most important consideration was the value they saw in their solar investment.  Reducing overhead costs is good for both the company and our clients. 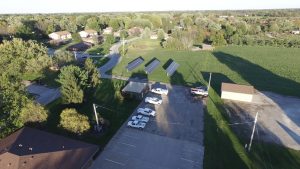