The American Council of Engineering Companies of Iowa has announced the sludge storage tank project at the Fairfield wastewater treatment plant has won an Honor Award in their 2013 Engineering Excellence Award Competition. The Honor Award is 2nd Place in the Water and Wastewater Category among all projects in Iowa for the past year. 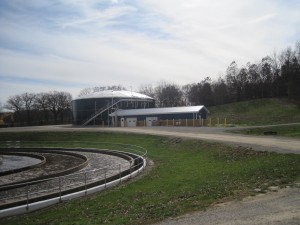 treatment facility. The project included the construction of a wastewater biosolids storage system including a 1.1-million-gallon storage tank.

This project is one of several wastewater improvement projects required by the Iowa Department of Natural Resources (IDNR), which are now in operation. These projects were designed by French-Reneker-Associates, Inc. of Fairfield, Iowa.

The biosolids storage system was constructed by Grooms & Company Construction, Inc. of Ottumwa, Iowa, at a cost of $3,652,000.

When you reach the end of the plant’s entrance road, the silver geodesic dome roof and blue steel tank jumps into view. The tank is 90 feet in diameter and 28 feet tall. The tank walls are constructed of glass-fused-to-steel plates bolted together. The blue glass is fused to the steel plates similar to the enamel on cast iron bathroom fixtures and cookware. Neither the tank or aluminum roof will ever need painting. The tank project has been designed to minimize maintenance and to load tanker trucks quickly for optimum land application.

Adjacent to the tank is a control building, which houses air blowers, along with piping, valves, flow meters, a biosolids grinder, pumps, sensors, and controls. These components, along with others, work together to manage the biosolids produced from the biological treatment process. These biosolids are ultimately spread on farmland and replaces a portion of the fertilizer requirements and adds organics.

The project eliminates a significant bottleneck in the treatment process. Previously, there was min 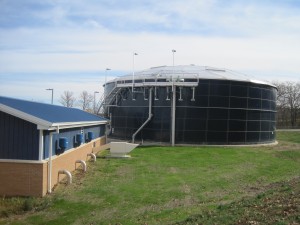 imal storage of biosolids which required the city’s single land application truck to operate weekly. This affected plant performance and over the years, biosolids were put in the storm water detention ponds. These ponds were initially constructed to temporarily store a portion of the excess water reaching the treatment plant and release it back to the plant when flow decreased. Adding biosolids to the storm water ponds significantly reduced capacity to temporarily store water.

Now that the biosolids storage tank is in operation, the City has removed the remainder of biosolids from the storm water detention ponds to maximize their storage capacity. This increased storage will reduce flows to the treatment plant and incrementally reduce sewer overflows, which have been the primary concern of the City and the IDNR.

French-Reneker-Associates Successful in Aiding Three for Three Communities in...
Scroll to top